This year’s Isle of Man Classic TT will celebrate the life and career of Steve Hislop, one of the greatest British motorcycle racers of all time. ‘Back to the Future: The Hizzy Years’ takes place 30 years after Hislop set the first ever 120mph lap around the TT Mountain Course, a speed that remains a benchmark for competitors three decades on.

2019 marks exactly thirty years since the Hislop became the first rider to lap the 37.73-mile TT Mountain Course at an average speed of 120mph, but three years after this historic feat, he was involved in what has subsequently been voted the ‘Greatest TT Race of all Time’ – the 1992 Senior TT – when he rode the 588cc NRS Norton to a stunning 4.4s victory over arch rival, Carl Fogarty.

After four years with Honda where he won no less than seven races and repeatedly shattered the outright TT lap record, Hislop’s services were strangely despatched with at the end of the 1991 season and he signed a deal to ride for Yamaha.

However, this new deal fell through just a couple of months ahead of the TT and Hislop found himself searching for rides in all of the classes. The Padgetts Motorcycles team stepped in at the last minute to supply him with a Yamaha TZ250 for the Junior Race and the Magic Wheels team were able to provide him with a 600cc Honda for the Supersport Race.

Both were race-winning packages but Hislop was still without a ride in the headline Formula 1 and Senior Races, just weeks before the TT. In an 11th hour deal, Hislop secured a deal to ride a 588cc, rotary-engined Norton NRS under his own team. Backed by security company Abus and EBC Brakes, Hislop and his team raised the £25,000 to lease one of the Nortons from the official team in just one month but would run it in plain white colours as opposed to the familiar black, silver and gold John Player Special paint scheme used by the official team.

It was very much ‘David versus Goliath’ as Hislop sought to take on the might of the biggest motorcycle manufacturers in the world as a privateer with an unfancied and idiosyncratic machine. While Norton had taken the short-circuit scene by storm since they debuted a rotary-powered bike at the end of the 1987 season, with numerous race wins in the British Formula 1 Championship, 750 Supercup and even the North West 200, the bike had struggled to repeat these successes in 1992 due to a change in chassis from the Spondon-built RCW frame to the Harris-built NRS frame, and a shift from Dunlop rubber to Michelin.

Hislop only managed one test session on the bike – nicknamed ‘The White Charger’ – prior to the TT, putting in just eight laps in total at Oulton Park. Nevertheless, he arrived on the island to go head to head with the Honda pairing of Phillip McCallen and Joey Dunlop and also Fogarty who, like Steve, had lost his ride with Honda. Ironically, he had taken over the 750cc Loctite Yamaha OW01 vacated by Hislop.

Despite the lack of track time with the unfamiliar and unconventional Norton, Hislop again showed his TT Mountain Course prowess with the fastest lap during practice week at an average speed of 121.38mph. It wasn’t coming easy though and he admitted to having a number of hair-raising moments as he struggled to get the bike to handle anywhere close to what he was used to.

The opening Formula One Race saw Fogarty set a searing pace and at half race distance, Hislop was sat in third and was almost a minute down on the Englishman, as the Norton overheated in the warm conditions and instability issues persisted. Drama then struck on the fifth lap when Fogarty retired to leave McCallen in the lead by 18.8s.

Hislop tried as hard as he could despite the problems, setting the fastest lap of the race at 123.30mph – only 1.6s outside his 1991 lap record set on the vastly superior RVF Honda – on the final lap. It wasn’t enough though and while it reduced the time deficit, McCallen took his first TT win by 12s.

While Hislop struggled with the handling of the bike, top speed wasn’t an issue as the notoriously fast Norton was reportedly clocked at 193mph along Sulby Straight. Changes were made after the Formula 1 Race in readiness for the Senior, with the front mudguard removed to aide cooling, a taller screen fitted to shelter Hislop from the incredible wind speeds, and wider and higher handlebars added to help with the changes of direction and provide a more comfortable riding position on the relatively small machine.

By the end of race week, neither Hislop or Fogarty had taken a race win and they were both determined to do so in the Senior TT. The pair had both earmarked it as their final race on the TT Mountain Course as they planned to move full-time into the World Superbike Championship the following year.

Conditions were perfect all around the 37.73-mile course for the final day of race week, and the Senior TT would be a thrilling climax as the two riders battled for the entire six laps, swapping positions throughout.

At the end of the first lap it was Fogarty, starting from number four, who led Hislop by 1.2 seconds after posting a lap of 121.90mph, with Robert Dunlop just 3.4s down in third on the second Norton. Second time around, it was Hislop who lead. His lap of 123.09mph had seen him turn his slight deficit into a 2.8s advantage as they made their first pit stops. 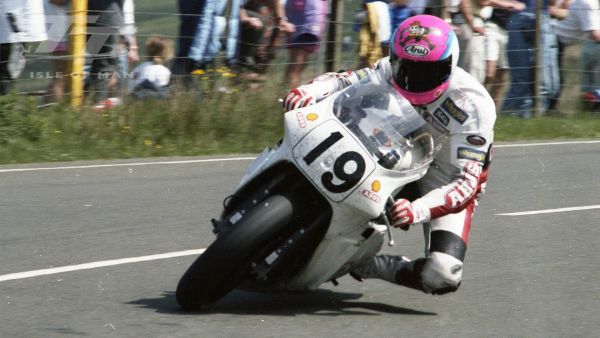 By half distance, the lead had changed again and it was Fogarty who was back in the lead – albeit by the slender margin of just one second. Robert Dunlop still held third place, but by then it was a two-horse race as he was some 36s off the lead.

Lap four and as if the race needed more excitement, Fogarty started to run into a myriad of machine trouble including a blown exhaust. Hislop lapped at 123.27mph to not only go back in front, but lead by a slightly more comfortable margin of 7.4s.

Fogarty wasn’t done just yet though and although lap five was the first lap where there were no lead changes, he brought the gap down by two seconds to 5.4s. Hislop had lost some precious time in his second pit stop when his mechanics fumbled with the petrol cap. It took some potentially race-saving words of advice from team manager, Barry Symmons, to calm the team down: ‘Don’t panic – slow down.’

The win was still very much for the taking and on the final lap, Fogarty set a new absolute lap record of 18 minutes 18.8 seconds equal to 123.61mph – a record that would stand for an incredible seven years.

It wasn’t enough though as Hislop was just a second slower at 123.50mph, also inside the old lap record, and he took his ninth TT victory by 4.4 seconds to give Norton their first Senior TT win since 1961. At the time, it was the fastest TT in history with Steve’s average speed for the entire six laps a stunning 121.28mph.

Separated by over a minute on the road, the pair were never more than 7.5s apart on corrected time over 6 laps, 226 miles, and just under 2 hours of racing. It was a remarkable achievement for Hislop and his team, with no British marque winning the Senior TT since. 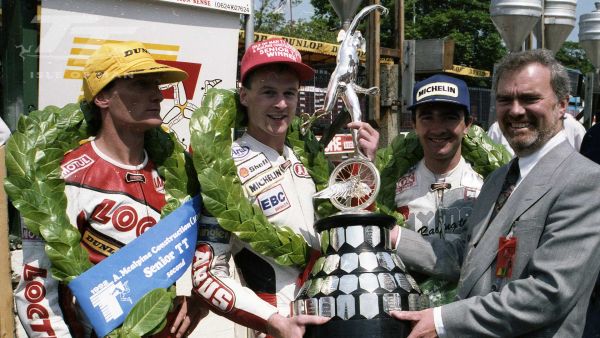 Fogarty never raced the TT again and switched to the increasingly popular World Superbike Championship with the factory Ducati team for 1993. Meanwhile, Hislop opted to miss the 1993 TT but was to be tempted back one more time…

As part of the 'Back to the Future: The Hizzy Years', John McGuinness will ride the 1992 Norton NRS588 ridden by Steve Hislop as part of the demonstration lap on Saturday 24th August.

Tickets for the 2019 Classic TT are now on sale via the Official iomttraces.com website including Official Grandstand Tickets, VIP Hospitality Experiences, and Official Entertainment Events including the Counterfeit Stones Classic TT Party Performance. You can stay up to date with all the latest Classic TT news by subscribing to the Official Isle of Man TT Races Newsletter.